Parenting is the most beautiful feeling in the world. But, with this beautiful feeling comes enormous responsibilities. The constant pressure to keep up to expectations might lead to fear of failure. The constant fear of failure might lead to a delusion in new parents. The effects of a secret relationship between loss, parenting, and delusion hurt the child’s upbringing.

Why is your child not listening to you? Do you get to hear this from all your friends & family? Don’t worry we can help you. Sign up for our program & our psychologist will get in touch with you to get your life back on track

People define failure as the inability to meet the desired goal. It can be anything from not getting good marks and not passing in class to the feeling of not being able to raise children properly. Although you know you cannot avoid failure in life, you cannot accept it. At some time in your life, you have to face a failure. The problem with failure is that you tend to associate failure with self-worth. Therefore, when you cannot perform well in something, you feel you are not worthy. Sometimes you might be made to feel unworthy by peers too. Failure has different connotations for different people. It might be a stepping stone to success, while failure might seem to be the world’s end for others. You must learn that failure is part and parcel of the human experience. If you do not experience failure, how will you know the joy of success?

We describe parenting as how parents raise their children. It can also be how they protect and care for their children to ensure they smoothly transition into healthy adulthood. It has been an age-long concept that parents have a substantial and direct influence on the upbringing of their children. If the children turn up wrong, the blame falls on lousy parenting. Therefore, parents are constantly under pressure to raise children who grow up to be good human beings.

Delusion is a serious mental disorder in which one cannot differentiate between the real and the imagined. One begins to believe in things that are not true. A delusional person will always feel confused. They might even have hallucinations or see and hear things that are not happening. The tricky part is that no one can make them believe that they imagine things that are not valid. They have an unshakable belief in their imagination. 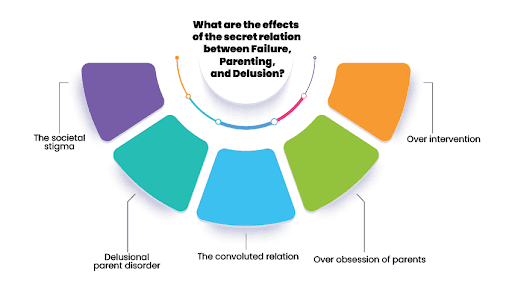 What is the secret relation between Failure, Parenting, and Delusion?

How do Failure, Parenting, and Delusion relate to each other?

What are the effects of the secret relation between Failure, Parenting, and Delusion?

The effects of the secret relationship between failure, parenting, and delusion depend on how delusional the parent is.

We can treat this complex relationship between failure, parenting, and delusion with therapeutic intervention. However, this requires a timely diagnosis of the situation. If one parent suffers from delusional parent disorder, the other parent should offer help through counselling and therapy. As parents confuse delusional parent disorder with a sense of care and protection for their children, the condition often goes unnoticed. One should abandon the societal stigma that parents are responsible for a child’s success and failure to remove fear from the parent’s minds.

You can visit www.unitedwecare.com for more information. Our in-house team of trained mental health professionals are always here to hear you out and help you deal with your complex feelings.

Time to heal your mind.