Zoophobia: 10 Facts That Will Make You Rethink Your Fear Of Animals 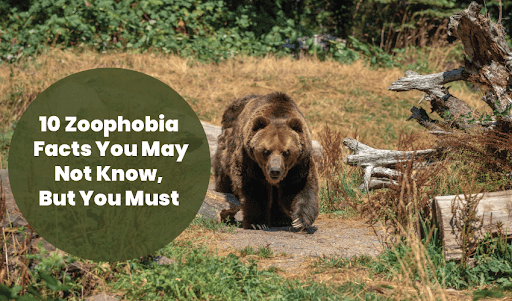 Humans are afraid of several things, which is normal. But when fears transgress into a state of anxiety disorder in which a person has an intense, illogical dread of a living being, place, object or situation, it becomes a phobia. So phobias of any kind can be distressing in the long term. They cause a lot of stress, anxiety, and panic. The phobia of animals is known as zoophobia.

Zoophobia is the phobia of animals. A zoophobic person experiences extreme disgust and fear of animal(s).

However, want to know some amazing facts about this phobia? So keep reading until the end for ten zoophobia facts you probably didn’t realise until now.

How to Identify Zoophobia?

Zoophobia is an uncontrollable fear of being around animals. So it is an anxiety disorder that causes significant distress to people who experience it.

An individual suffering from zoophobia may show the following symptoms:

How many types of Zoophobia are there?

So there are several types of zoophobia. The most common ones include:

What are the effects of Zoophobia?

So the effects of zoophobia include psychological symptoms such as:

Children may often become numb, scream or hide to avoid the trigger source at all costs.

What is the reason behind zoophobia?

Experts have not been able to pinpoint the cause of zoophobia accurately yet. Nevertheless, certain factors can predispose a person to the same. They could range from genetics to family members passing on the fear and individual trauma.

Here is a breakdown of some of the causes:

Negative experiences with an animal in the past or a traumatic situation where one may have to face an animal can explain zoophobia. These incidents profoundly impact a person’s mind, leading to phobia formation.

However genetic predisposition is another reason behind zoophobia. It means one may inherit genetic information from parents and their characteristics of fearing animals. One may also learn this behaviour as a child they see their parents scared of animals in front of them.

How to overcome zoophobia?

Here are some steps to overcome zoophobia:

Now other ways to gradually conquer the fear could include watching the animal’s pictures, imagining them in positive, safe spaces, and engaging in conversations about these animals in a friendly way that does not cause any irrational thinking.

What is the treatment for zoophobia?

There are several treatments for zoophobia. Now some of the most commonly used treatments are cognitive behavioural therapy, exposure therapy, and medication control the symptoms:

They form new realistic thought patterns, which help people let go of the anxiety response they may face. So it also includes cognitive restructuring, systematic exposure, and mindfulness training. It allows people to look away from their thoughts, detach from the situation, and reason.

So, do you know these facts about zoophobia? Have a look below:

However, zoophobia is an intense feeling which causes disgust and fear of animals. So it is not specific to a particular animal, and different people face different types of specific phobias. Now they become anxious and stressed and try to avoid the triggers. The treatment for this phobia includes C.B.T., exposure therapy, and medications. So these treatments can help a person face the fear objectively, and gradually they can live a better quality of life. The trained mental health professionals at United We Care deal with anyone suffering from it or other phobias. Feel free to reach out for more information!