Restless Leg Syndrome: How to Deal with It 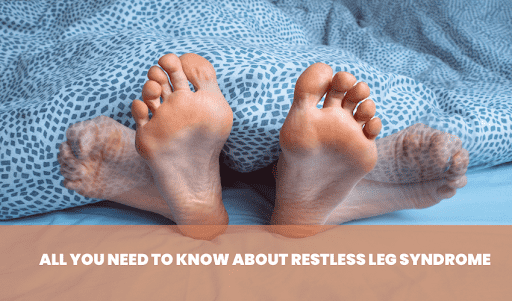 Do you have an uncontrollable urge to move your legs? Do you often find it difficult to sleep due to restlessness and constant pulling and tickling sensation in your legs? Does sitting stationary or lying down become so painful for you that you cannot focus on anything else? You may be suffering from something known as restless leg syndrome.

Read this article to determine the causes, risk factors, and treatment for this issue.

What is restless leg syndrome?

However, it is often called Willis-Ekbom disease, a medical condition and is a classified neurological disorder in which one constantly moves their leg.

Individual experiences are mild to intense discomfort, tingling, overwhelming sensation, pulling, crawling, and the urge to move their legs.

A change in dopamine levels in the brain can often result in this neurological condition. Hence an individual may have even an overwhelming urge where they cannot stop moving their legs. A person is sitting still or sleeping. A person may experience intense crawling, painful, pulling sensation, and sudden twitches and jerks. Imbalances cause this in the dopamine pathways, which are essential for muscle signalling and nerve contraction. It is a condition with a hereditary pattern. People with this issue have specific genes on their chromosomes, which they may have inherited from their parents. Doctors have observed several cases of genetic problems.

What are the symptoms of restless leg syndrome?

An individual can develop Restless Leg Syndrome because of hereditary patterns of the disease seen in the family.

It occurs in people aged between 35 and 40. Children with attention deficit hyperactivity disorder, autism, and developmental delays may also have this condition.

There is no specific reason for this problem. Several studies have revealed that changes in levels of chemical messengers such as dopamine can cause this syndrome. Dopamine is responsible for sending messages to the neurons, and it majorly controls muscle movement. When there is an imbalance of dopamine, one may constantly move their leg and may not be able to handle it voluntarily.

One may have mild issues, which lifestyle behaviours such as smoking and alcohol may aggravate.

A person’s physiological state also aggravates this syndrome. For example, one may have symptoms of restless leg syndrome due to hormonal changes during pregnancy.

Another cause of restless leg syndrome can be underlying diseases such as Parkinson’s, Alzheimer’s, etc.

Thus, more research is needed to understand the exact causes of restless leg syndrome, but there is a high risk due to lifestyle behaviours and disease conditions.

How is restless leg syndrome treated?

The treatment of restless legs syndrome is often a combination of lifestyle modifications and pharmaceutical therapies.

Sleeping pills are the most commonly used treatment for this issue. Usually, people with this syndrome find it difficult to fall asleep even after being tired. The first line of treatment here is through sedatives such as zopiclone, zolpidem, temazepam, and clonazepam. They improve your sleep patterns and help you relax.

How can you cope with restless leg syndrome?

People who experience restless leg syndrome need to sleep early and have a routine in tune with their circadian rhythm. Foods that promote sleep, such as milk, cardamom, turmeric, and saffron, can also be consumed.

It causes a lot of distress in the muscles and intense pain. It is essential to train these muscles to relax. Exercises such as yoga, tai chi, meditation, stretching, etc., are helpful.

A balanced diet is another lifestyle modification that is advisable for people suffering from this syndrome.

It is a chronic condition. One can effectively reduce the intensity of symptoms and live with them without any distress using proper medication and lifestyle management. It is essential to take the necessary drugs and get the correct treatment.

One must establish a good sleep hygiene routine. Avoid stimulants a few hours before bedtime, as they may aggravate sleeplessness and cause intense symptoms of this problem.

A balanced diet rich in whole foods, proteins, vitamins, and minerals is essential. People with iron deficiency may experience more intense symptoms of this issue. Intake of iron-rich foods and supplements is crucial.

If it is left untreated; it may cause depression, anxiety, and insomnia. Take good care today and seek timely medical attention.