MAO-A or genetic inheritance: May be the cause of aggression in your kid 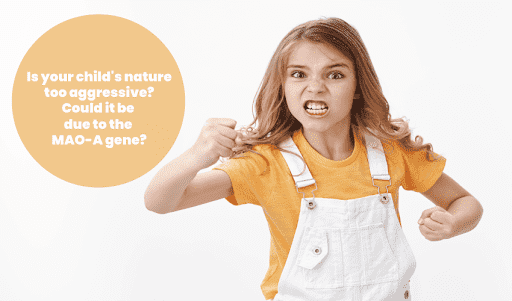 You may have often observed that your kid is angry for no reason. You may watch them start showing tantrums or being aggressive without a second thought. Why is it so?

What is the reason for such transformed behaviour in your kid? You may have observed them suddenly transition from a normal calm kid to an aggressive and angry person. They may be just making decisions without any wise thought. Such a situation occurs when your kid has MAO-A.

Monoamine oxidase A, also known as MAO-A, is an enzyme that in humans is encoded by the MAO-A gene. This gene is one of two neighbouring family members that encode mitochondrial enzymes that catalyse the oxidative deamination of amines, such as dopamine, norepinephrine, and serotonin. A mutation of this gene could also result in Brunner syndrome.

Doctors have associated the Monoamine oxidase A gene with various psychiatric disorders, including antisocial behaviour. It is because it actively destroys the neurotransmitters of the brain, which are mainly responsible for communicating with the rest of the body and thus causing aggressive behaviours. 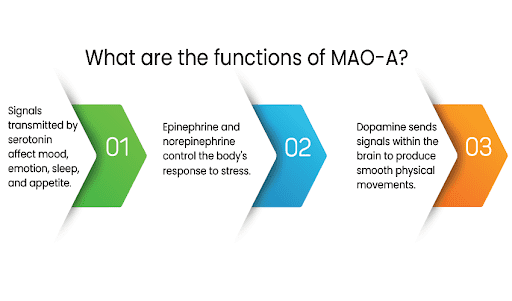 What are the functions of MAO-A?

The normal function of MAO-A is to provide instructions to create an enzyme. The enzyme is a member of the enzymes that break monoamine oxidase molecules through oxidation. MAO-A parts to breaks down neurotransmitters such as serotonin, epinephrine, norepinephrine, and dopamine.

How does aggression arise from MAO-A?

MAO-A gene is located on the X chromosome and is also known as the Warrior gene. People display aggressive characteristics due to excess serotonin, epinephrine, norepinephrine, and dopamine. MAO-A is a mutant mouse, making it more aggressive and reactive to stress. Humans have different categories of M.A.O. variants.

Studies have linked the MAO-A gene to violent or physically dangerous activities that are impulsive and unplanned. It can also be remotely related to Burner’s syndrome. Apart from aggression, there are various factors that you can keep a watch on to determine whether your child has MAO-A. These factors include unbalanced sleep habits, impulsive hand movements, and lack of intelligent behaviour.

What is the genetic inheritance of aggression from MAO-A?

Research shows that in the 1990s, the lower level of MAO-A showed a higher frequency of aggressive behaviour among people. Even higher when individuals are traumatised or poorly treated during their early childhood, it leads to antisocial personality disorder.

MAO-A gene is located on the X chromosome and is also known as the Warrior gene. The presence of this gene affects the following systems:

How do you control the aggression in your kids, which is a possible contribution of MAO-A?

You can give your child monoamine oxidase inhibitors (MAO-AIs) to take possible measures. These are the first type of antidepressants. While using MAO-AIs, you must take strict care of their diet and several other medications, which severely affect your blood pressure.

An enzyme named monoamine oxidase degrades neurotransmitters like serotonin, epinephrine, norepinephrine, and dopamine. MAO-AI help to prevent this action. For this reason, more brain chemicals are prone to change in both circuits, and cells depression has impacted.

The Food and Drug Administration (F.D.A.) has approved MAO-AIs to treat depression.

Side effects of MAO-AIs include:

Also, take care of specific safety concerns that are associated with MAO-AIs:

MAO-A causes a disorder that can turn your child’s character into something they may not be. The disturbing levels of neurotransmitters compel a person to conduct absurd activities. Although there is no definite cure for this disease, MAO-A inhibitors work wonders. They ensure that the right amount of neurotransmitters are released and present in the body.

Understanding such patients and their trigger points can also help them a lot. Controlling environmental factors and therapy have proven useful. If your child is impulsive, aggressive and shows traits of MAO-A, you must consult a doctor soon.