Monkeypox: Everything You Need To Know 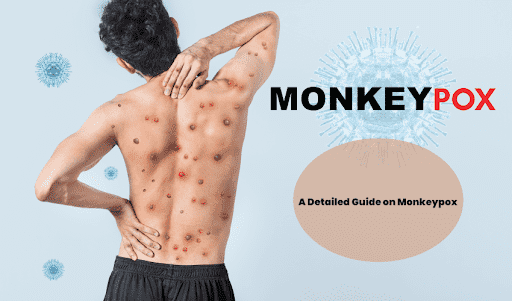 Monkeypox got named monkeypox since scientists observed the virus among the monkeys kept for research in Copenhagen laboratories in 1958. Later in 1970, the monkeypox virus was detected in humans living in the Democratic Republic of the Congo. Today, in 2022, there is an outbreak of this virus in different countries worldwide. Let’s take a look at the situations of the monkeypox virus in these countries and the ways to detect and prevent ourselves it.

Monkeypox disease is a zoonotic viral disease caused by the monkeypox virus. Viral zoonotic diseases are those transmitted from animals to humans. It can also spread between people. The animals carry the virus. Various animals, including rope squirrels, tree squirrels, Gambian pouched rats, dormice, non-human primates, and other species, are quickly affected by this virus. They can act as the carrier of the virus. It was a common disease in humans of the tropical rainforests region of central and western African countries like Cameroon, Central African Republic, Côte d’Ivoire, the Democratic Republic of the Congo, Gabon, Liberia, Nigeria, Republic of the Republic Congo, and Sierra Leone.

These regions are vulnerable to monkeypox due to the presence of animals since they have dense forest areas and are not so developed. The Monkeypox disease in Central Africa is more dangerous than in western Africa.

What Are The Symptoms Of Monkeypox

The virus of this disease belongs to the Orthopoxvirus genus. The variola virus (causing smallpox) and the vaccinia virus (used in smallpox and cowpox vaccines) also belong to this genus. The symptoms of monkeypox are similar to those of smallpox but milder. Also, there is lymph node swelling in the case of monkeypox.

The initial symptoms of monkeypox are fever, headache, muscle aches, chills, backache, and exhaustion. It takes 7-14 days from the time from infection to symptoms to occur (sometimes 5-21 days).

After one to three days of fever, a facial rash appears, which spreads to other parts of the body. Before falling off, the lesions change from macules to papules, vesicles, pustules, and scabs. The disease typically lasts for two to four weeks. 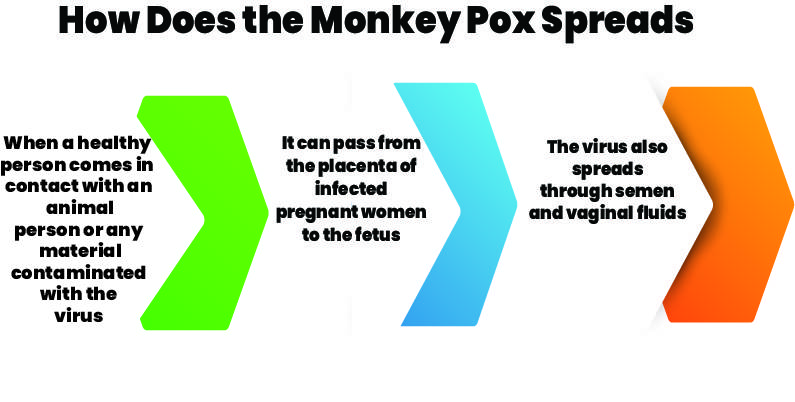 How Does Monkeypox Spread

Monkeypox can spread in one of the following ways:

How Is Monkeypox Treated

Monkeypox is milder than smallpox, and patients typically recover within a few weeks, even without specific treatment. Currently, there is no recognised and proven treatment available for monkeypox treatment, although there are some certain antiviral drugs. It is better to isolate ourselves if we are diagnosed with this disease. It will provide safety to others and us too. If the symptoms turn severe, it would be best to seek a medical opinion.

What Should You Do If You Think You Have Contracted Monkeypox

Suppose you live in an area with known monkeypox, and these symptoms appear in you. In that case, you must prevent yourself from coming in contact with others and go to the doctor for a systematic diagnosis.

Monkeypox has symptoms to detect whether you have contracted it or not. You can experience initial symptoms are fever, headaches, backache, muscle ache, and swelling.

After one to five days, you will get rashes and lesions on your face, hands, feet, eyes, mouth, and almost whole body in later stages. These rashes will later break, and you will be the cure of the disease. But in the period between the infection, if you feel weakness or your immune power decreases, then take the proper treatment from a doctor. Also, during the time of disease, stay isolated to prevent the spread of disease.

What Are Some Ways For Prevention Of Monkeypox

The best way to prevent the monkeypox virus is to stay away from the areas or regions that have a history or have an infestation of monkeypox in the current situation. Some of the preventive measures for monkeypox are as follows:

Monkeypox is similar to smallpox but is much milder. You can manage it at home without specialised treatment or drugs. Although there are no specific drugs or vaccines for monkeypox, doctors found the smallpox vaccine effective in preventing and treating it early. Specific antiviral drugs also have shown some promise in treatment.

Monkeypox prevention is always better. But if contracted, it helps to be aware of the symptoms and seek medical attention if necessary. Isolation always helps contain its spread. It is a self-limiting disease, and patients typically recover within two to four weeks.