ASPD: What You Should Know About Sociopathy and Neuropathy 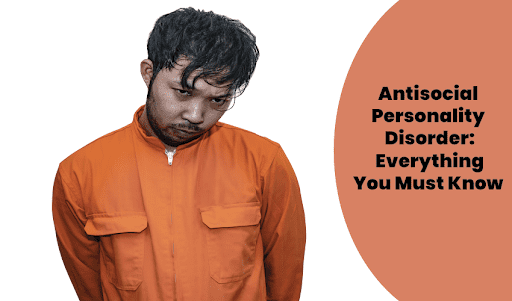 Mental health disorders are complex and often challenging to diagnose and treat. The biggest hurdle in identifying a mental health disorder is overlapping symptoms. For example, when we see a young child or teenager being rude or harsh with someone, we often judge them as misbehaving. But, did you know this could be a sign of an underlying psychiatric condition like Antisocial Personality Disorder (ASPD)? Let’s understand more about this condition.

What is the meaning of ASPD?

Antisocial Personality Disorder is a mental health condition, and people suffering from this condition show a lack of respect and interest in others. They rarely abide by social norms and rules and instead prefer to violate them to harm others.

People suffering from ASPD break all kinds of laws as they don’t have so much respect for others. They do not think about consequences or feel responsible or accountable for their actions.

ASPD is one of the many personality disorders that affect how someone thinks or behaves. According to research, ASPD affects around 1–4% of the U.S. population. Individuals with this condition lie, become violent, are impulsive, and may have drug or alcohol overconsumption problems. Because of these negative traits, people with ASPD find it challenging to balance their personal, professional and social responsibilities.

Traits and behaviour of ASPD usually develop in early teens. After testing children below 18 years of age for this condition, misdiagnosis happens as a conduct disorder. However, children with conduct disorder tend to lie, steal, and bully other kids.

Who is a sociopath with ASPD?

Though  ‘sociopathy’, or ‘neuropathy’ refer to sometimes as ASPD and those with ASPD may be called ‘sociopaths’, doctors and healthcare providers do not use them for clinical purposes. However, there are commonalities between characteristics of sociopathy and ASPD, including an absence of conscience.

A sociopath is an individual with ASPD. While people with this condition appear charismatic and charming initially, they are rule-breakers, aggressive, impulsive, and manipulative with controlling behaviour.

What is neuropathy with ASPD?

Unlike sociopath, neuropathy is a physical condition that occurs due to damage or dysfunction in one or more nerves of the body, resulting in numbness, tingling, muscle weakness or pain in the affected area. Neuropathies are most common in the hands and feet but can affect other body parts too. While sociopaths are similar to people with ASPD, neuropathy or neuropathic individuals show different symptoms. 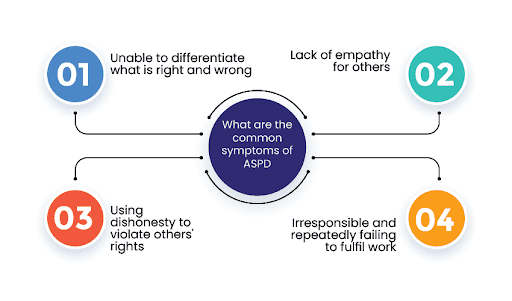 Many parents and healthcare professionals may overlook the symptoms of conduct disorder in children early. These may match symptoms of conditions like A.D.H.D. (attention deficit hyperactivity disorder).

By diagnosing and treating these problems early in children, it is possible to prevent them from continuing into adulthood. However, the diagnosis becomes Antisocial Personality Disorder at 18 years without detecting and preventing the signs early.

Common symptoms of ASPD include:

What are the causes of ASPD?

Your personality combines your thoughts, emotions, behaviour, and experiences in life and is the only factor that distinguishes you from others, making you unique. It is the only way people understand and communicate with the outside world and how they see themselves.

Though the exact causes of ASPD are still unknown, a few suggested ones include:

What is the treatment of ASPD?

So far, no blood or imaging test to help diagnose ASPD. Your healthcare provider will assess your health history, conduct a few physical examinations, and evaluate your behavioural symptoms. Ideally, this will be a psychiatrist or psychologist specialising in treating mental health disorders.

There are few treatments for ASPD, but therapies like psychotherapy or medications may aid in controlling ASPD-specific behaviour. According to studies, ASPD symptoms are worse around 24–44 years of age but may show improvement after 45 years.

Medications for ASPD generally help individuals with impulsivity, aggression, and other erratic moods. Your psychiatrist or psychologist may recommend:

People with Antisocial Personality Disorder may benefit from the individual, group, or family therapy. Cognitive-behavioural therapy is a kind of therapy that aims at modifying an individual’s thinking and behaviour. Several other therapies can help people with ASPD introspect how their behaviour affects and disrupts other people’s behaviour and thinking.

What is the prognosis of someone with ASPD?

Despite the various treatments for ASPD, there is no cure for the condition. With the proper intervention, people with ASPD can effectively manage their symptoms. Medications and therapies can help them improve their quality of life and reduce the frequency of symptoms. An excellent long-term relationship with your doctor, healthcare and support team is vital.

Also, it is essential to understand that you cannot prevent ASPD, but identifying the early signs and symptoms in children by parents, teachers, and paediatricians can prevent the condition from blowing up into a full-blown disorder. So, with timely and suitable treatment, the prognosis for someone with ASPD is good to excellent.

ASPD causes the person to act without considering how their actions and behaviour affect other people’s thinking and perspectives. People suffering from ASPD may disobey and break many rules and harm various people without thinking about their feelings. They often show no sympathy, remorse, or responsibility for their families or friends.

Several ways can help people suffering from Antisocial Personality disorders. Certain medications and psychotherapy may benefit people suffering from ASPD. With proper treatments and medicines, they can stop their thinking and improve their mental conditions – thoughts and behaviour. Psychiatrists conduct comprehensive mental health assessments to detect ASPD and suggest the most suitable treatment plan. As parents, caretakers, teachers, mentors, and doctors, it is everyone’s responsibility to spot signs of ASPD in young children and seek immediate psychiatric help to give them a normal childhood and life.