Hallucination, delusion, illusion, and delirium are symptoms of psychosis, a mental disorder that disturbs the flow of brain processes and causes a person to believe in things that aren’t real. People suffering from conditions such as schizophrenia have these symptoms. The overlapping nature of the symptoms makes the diagnosis difficult. Hence, proper differentiation and timely diagnosis help are crucial for appropriate treatment and therapy.

What are hallucinations, delusions, illusions and delirium?

Hallucination, delusion, illusion and delirium are symptoms caused by certain illnesses. The illnesses could be Parkinson’s disease, brain tumours, Huntington’s disease, Alzheimer’s disease, H.I.V., epilepsy, syphilis, stroke and even substance use and withdrawal.

Hallucinations refer to sensing things that seem real but are not real. For instance, the patient may see someone who doesn’t exist, feel that the person is tapping on the shoulder, or hear the imaginary person speak to them.

Delusions are false fixed beliefs that are challenging to amend despite conflicting evidence. For instance, a person can have a delusion that their spouse is cheating, and despite the evidence, you cannot change what the person is thinking.

An illusion is a condition where distortion of the senses happens. It can be easily confused with hallucination. However, when a person hallucinates, the stimulus doesn’t exist. A person sensing illusions can mistake a rope for a snake, so there is a stimulus but misunderstood.

Delirium is a condition which causes abrupt emotional disruption and mental confusion. A delirious person will find it difficult to remain conscious, fall asleep, or experience emotional disturbances. Delirium is common in people who have dementia.

How can a person be sure that what they saw was merely a delusion, hallucination, Illusions, And  Delirium, not a divine revelation?

In the olden days, delusions and hallucinations were considered demonic possessions or divine revelations. However, they now have medical issues requiring immediate attention, diagnosis, and treatment.

A psychiatrist is the best person to evaluate whether a person is hallucinating or it is a divine revelation. Therefore, if a person thinks they are experiencing such symptoms but are unsure if it is accurate, they should consult a psychiatrist. A psychiatrist analyses the frequency of the visions, whether the person is on prescribed drugs, and there is extreme stress. Doctors sometimes recommend brain scans to check whether a tumour is causing these delusions and hallucinations.

Does anyone have any experience with tactile illusion as a symptom of lamotrigine treatment?

Lamictal, or Lamotrigine, is a medicine that helps treat the symptoms of epilepsy and mood disorders. It has usability to treat bipolar disorder. Although rare, there have been instances of people experiencing delusions, irritability, and tactile illusion as extreme side effects of Lamotrigine treatment.

Let us consider an example. A 44-year-old white man living with DSM-4 bipolar two disorder for the past 20 years was in depression and had hypomanic episodes every year but had never experienced tactile hallucinations. Doctors prescribed him Lamotrigine 100 mg twice daily. After four weeks of taking the medication, he started feeling insects crawling on his skin when there were none. His mental condition was stable, but his illusions continued. The doctor lowered his dose of Lamotrigine to 50 mg, but the tactile illusions continued. It was after he stopped having Lamotrigine that he stopped having illusions.

What may be a therapeutic method for schizophrenia patients to recognise that their auditory hallucination isn’t real?

In C.B.T., a psychotherapist helps the patients deal with their perceptions instead of ignoring them. If they heard a voice, initially, they would have thought it was the devil speaking to them. With C.B.T., they learn to face auditory hallucinations. So, instead of thinking it is the devil, they now condition their minds to believe that it is their schizophrenia that makes them hear unreal voices. The therapist helps the patients lead a more normal life and avoid stress. 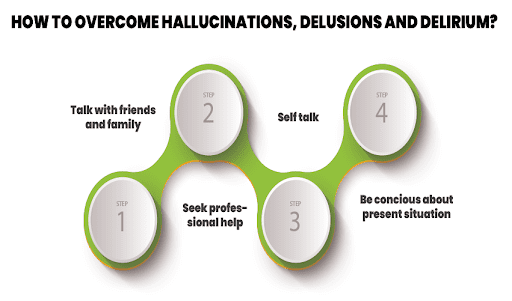 What’s The Difference Between Hallucinations, Delusions, Illusions, And Delirium?

Hallucination, delusion, illusion and delirium are all symptoms of psychosis and require urgent attention and treatment because, if left untreated, they can be life-threatening. Recognising the signs and seeking help as soon as possible is essential.

How do overcome Hallucinations, Delusions, Illusions, And Delirium?

It is good to talk about the symptoms to friends and family members. However, being vulnerable to family and friends can sometimes be challenging. It is where one can seek professional help. Trained psychiatrists and therapists can identify symptoms of psychosis and help patients treat hallucinations, delusions, illusions, and delirium. If you see your friends or family members exhibiting signs of psychosis, lend them a helping hand. Arrange for an appointment with a therapist and psychiatrist if you feel the situation is out of your hands. Timely intervention and treatment go a long way in managing hallucination symptoms, delusion, illusion and delirium.

C.T.A.: Get therapy and mental health counselling services from www.unitedwecare.com/areas-of-expertise/.

Life does not go through an easy way If the person has the symptoms of Hallucination, Delusion, Illusion, and Delirium. Lots of challenges will come. Family support is critical. They need trained therapists and psychiatrists. We know if there is a will, there is a way.

Get a step closer to a better life!

Explore our wellness programs & get started on your healing journey. There is a program to help you with every concern you have.