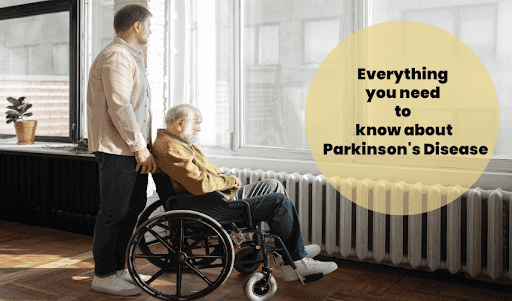 Parkinson’s Disease (P.D.) is a long-term degenerative disease involving the brain and the central nervous system. The motor system gets affected, which leads to difficulties in movement. The condition usually starts at 60, and the symptoms are mild initially but progress with age. The definite factor behind the development of the disease is unknown. Still, genetic and environmental factors combined with stress and lifestyle disorders play an essential role in Parkinson’s disease development.

What is Parkinson’s Disease?

The death of the nerve cells of the substantia nigra regions of the brain causes Parkinson’s disease. Though this brain region plays a vital role in controlling the movement of the limbs and body parts. Hence any damage to this part affects the activities of the limbs. Moves get slow and shaky, associated with tremors in one hand, stiffness of muscles and loss of balance. The condition worsens with age. Studies have revealed that damage to the nerve cells leads to a decrease in the production of the chemical dopamine. Low dopamine levels are the cause of the development of these symptoms. 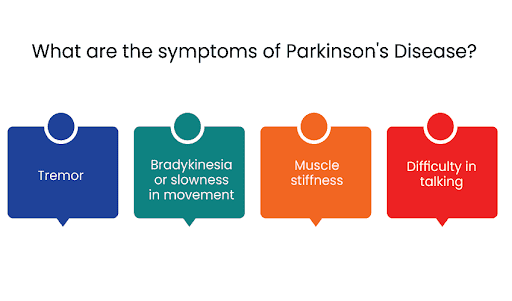 What are the symptoms of Parkinson’s Disease?

The symptoms of Parkinson’s disease and their nature of progression usually vary from person to person. The signs and symptoms may be mild and go unnoticed during the disease’s early days. At first, the onset of the disease affects one side of the body with the tremors and shakiness of limbs. With the progression of the disease, even though both sides may be affected, the side affected first rapidly worsens.

The signs and symptoms commonly identified are:

What are the causes of Parkinson’s Disease?

What are the treatment options for Parkinson’s disease?

Treatment options for Parkinson’s disease may include:

How is Parkinson’s disease diagnosed?

No single confirmatory test exists for the diagnosis of Parkinson’s disease. However, a study of symptoms and diagnostic tests can confirm it. Experiencing the following signs and symptoms over a long period may indicate Parkinson’s Disease:

Imaging tests are not always instrumental in diagnosing Parkinson’s Disease. Nowadays, doctors perform a DaT Scan or Dopamine Transporter Scan. In this scan, they inject a small amount of radioactive drug or tracer into the bloodstream that binds with the dopamine secreting cells of the brain. Next, they take Images to draw inferences about the condition and density of the cells.

What research is going on, on Parkinson’s disease?

Scientists are researching to find a possible cure and relief for anybody affected by this condition. They have accepted the certainty of gene involvement and are working to understand the same further. Currently, research is going on the following areas:

Every year thousands of people worldwide get affected by this condition. The degenerative nature of the disease destroys the quality of life as age progresses. It is detrimental to the person concerned and all those close to them, especially the immediate family members.

Medications like Levodopa improve conditions to a certain extent, but they too have their limitations and side effects. Overall the condition aggravates every day. An estimated 0.65 million people in India today are affected by Parkinson’s disease. Plenty of research is going on across the world to treat it. Researchers must discover medicines to cure the disease to the greatest extent possible. Improving the quality of life of affected individuals in rural and urban Indian populations is essential.